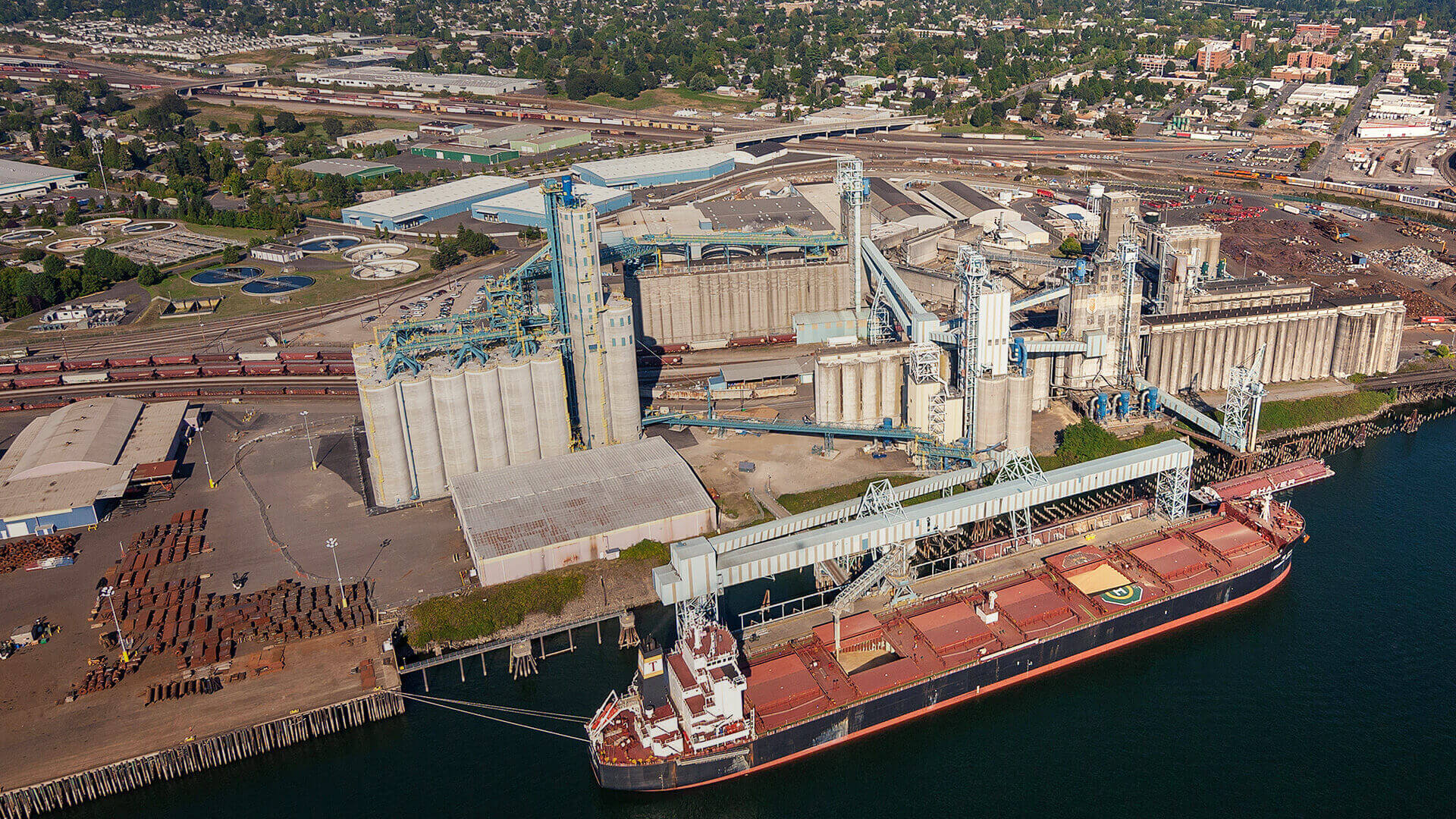 Working Together to Feed the World

According to the latest United Nations projections, the current world population of 7.6 billion is due to hit 9.8 billion in 2050 and 11.2 billion in 2100. With the world adding 83 million people per year, there are more and more mouths to feed.

Supplying this fast-growing world with a steady supply of basic foodstuffs is a challenge that Mitsui takes seriously. And our longstanding presence in the United States is a significant element in our response. Why the United States? Because the country is the world’s largest agricultural exporter, exporting a whopping $140.5 billion worth of agricultural products in fiscal 2017. Among these, soybeans, corn and wheat ranked first, second, and sixth by value, respectively. In fact, grains are the largest single category, together accounting for over 28% of all US agricultural exports.

Mitsui has been a major player in the US grain market since 1969 when it acquired United Grain Corporation, a collector and exporter of wheat based in the US Pacific Northwest, after it was spun out of Archer Daniels Midland. (Archer Daniels Midland is one of the big four “ABCD” commodity-trading companies, along with Bunge, Cargill and Louis Dreyfus.) United Grain’s prize asset is its Vancouver Export Terminal on the Columbia River, which boasts the largest storage capacity on the entire US West Coast.

United Grain Corporation currently handles around 5.6 million metric tons of grain per year, giving it a 17% share of the Pacific Northwest export market. The company achieved this strong position by broadening the range of grains it handled from just wheat to wheat, corn and soybeans. This was a reaction to two trends. First, farmers in the region started growing corn and soybeans in addition to wheat. Second China emerged as a massive market for soybeans, going from importing just 1.1 million metric tons in 1996 to 95.5 million metric tons in 2017, making it the world’s biggest importer.

United Grain needed to equip itself to handle these two new grains. Starting in the early 2000s, it began acquiring collection facilities for them. These facilities consist of so-called country elevators-inland grain elevators for local storage-combined with shuttle terminals for grain train shuttles, trains made up of around 100 covered hopper cars to transport grain from the point of origin to the sea. The company now has 18 country elevators, with 12 in Oregon, four in Montana, and one each in North and South Dakota.

As part of its diversification drive, United Grain also expanded the capacity of its Vancouver export terminal by over one-third, from 160,000 to 220,000 metric tons, in 2012. The numbers show how dramatically things have changed in the years since: In 2013, United Grain exported 2.5 million metric tons of grain, with wheat accounting for 80% of that total by volume. In 2017, not only had total exports increased by 126%, but the makeup of those exports was more varied than before, with wheat’s share at 40%, corn’s at 25% and that of soybeans at 33%.

Where are these exports destined for? All of United Grain’s output goes to Asia, where it is sold via the sales network of parent company Mitsui & Co. The biggest markets are Japan (39% by volume), then China (26%), followed by the Philippines, Korea and Thailand (8% to 9% each) and finally Taiwan (3%). Wheat is sold for flour; corn is used either for animal feed or to make high-fructose corn syrup (a sweetener); soy is crushed for animal feed. As the emerging nations of Asia get richer, their populations can afford to switch to a more protein-intensive?i.e. meat-rich?diet. That is driving up demand for the corn and soybeans that go into animal feed.

Of course, important though physical infrastructure like elevators, railway terminals and port facilities are to the grain business, intangibles like loyalty and relationships are no less key. It is the passionate commitment of the US-based national staff over the last half-century that has elevated the company to its present status.

United Grain has also worked hard to build extensive trust-based links with grain producers. The company acts as a bridge between producers and global customers, for example relaying information to American farmers about changing demand patterns in Asia on the one hand or helping Asian customers to adjust their orders depending on the protein levels of particular harvests on the other. Since there can be a time lag between when farmers want to sell and customers want to buy, United Grain can facilitate things by storing the grain in the interim. It also deploys strategies to help producers and customers hedge against the volatility of commodity markets.

Ultimately, United Grain seeks to make the export process as smooth, predictable and beneficial as possible for all parties. The seamless linkage of United Grain, Mitsui and Mitsui’s Asian customer base is a lifeline that helps to provide a stable supply of safe, delicious food for a growing world.