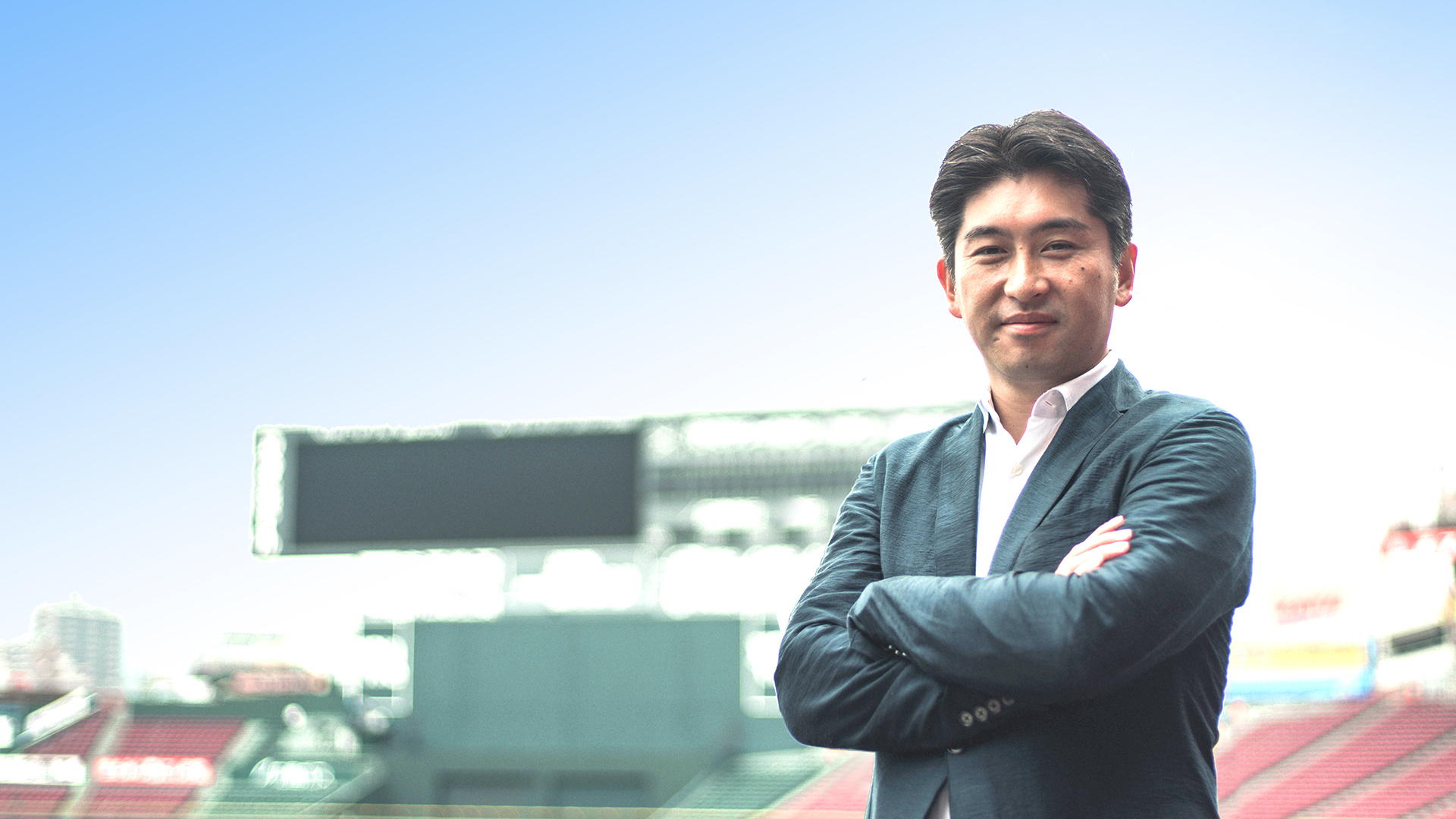 Sports facility management is a new business field for Mitsui. Mazda Zoom-Zoom Stadium Hiroshima, the company’s first project in the field, began life as the brainchild of one employee: Takashi Onogawa.

Takashi Onogawa joined Mitsui in 1998 as a business graduate. After several years working in fields like steel and media in the company and its subsidiaries, he began a one-year training program at Mitsui’s New York office in September 2004. While there, he studied sports facility management at New York University, earning a Certificate of Sports Operation. Drawing on this knowledge, he proposed that Mitsui enter the ballpark management business, and began work on the Mazda Stadium project after returning to Japan. Once the project was on a solid footing, he moved on, helping to establish Mitsui’s education business in 2012 and accepting a position in Europe in 2015. His current focus is on resolving the company’s operational issues from within the Corporate Planning & Strategy Department.

Learning the sports business from the pros 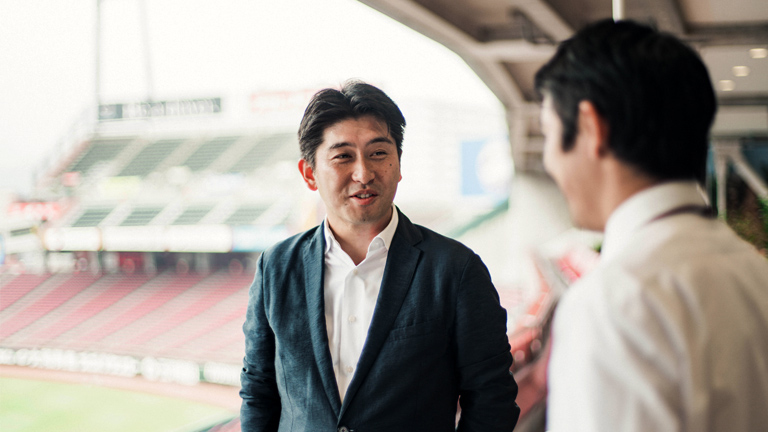 I’m currently in the Corporate Planning & Strategy Department, but I spent my first four years at Mitsui in the Steel Business. That left me wanting to work closer to the consumer side of things, so I took a position with our media business—satellite broadcasting, TV shopping and so on. We even made programs ourselves. I guess that even then I was the kind of person who wants to create something from nothing rather than step into a business that’s already up and running.

The Mazda Stadium Project grew out of my experience as a trainee in our New York office. I played American football in high school and university. While I was in the US, alongside my actual work at the office, I studied the sports business at New York University as a personal project—on my own dime, in fact! It was like a hobby.

My focus was on sports facilities management. Our professor had this theory that the sports business began by selling tickets, moved onto selling broadcast rights, and had now entered the age of the facility. Starting from the 1990s, there was a wave of Major League stadium rebuilding. And I got a lot of business ideas from the stadiums I visited in the US.

I also found out that Aramark Services, a Mitsui partner for forty years, handled food and beverage services for many US Major League Baseball teams. In Japan, there was AIM Services, a joint venture between Aramark and Mitsui that had provided food services at the 1998 Nagano Winter Olympics and the 2002 Japan–Korea World Cup. Clearly, as a company we had access to know-how in this field.

As I learned more, my hobby started to feel like something more than just a hobby. I started to seriously consider the possibility of Mitsui going into this business in Japan.

Timing was the most important thing. If we were going to launch a new facilities business, ideally we wanted to build the stadium itself, incorporating our operational perspectives into the design. In other words, it would be best to start with either a brand-new stadium or a remodeled one. This kind of project only comes along once every 20 or so years—however at that precise moment Hiroshima just happened to be considering a building successor to Hiroshima Municipal Stadium. “It’s now or never,” I thought, and began talking to our Tokyo office from New York about approaching the city of Hiroshima.

The Carp had been researching major league stadium management for many years as well, exploring all the possibilities open to them, including different financing options. In the end, it was decided that Mitsui would provide support for food services and sponsorship marketing.

When I came back to Japan in September 2005, I got straight to work. The project had been my idea, so I did all the groundwork for providing the stadium with food services and sponsorship marketing. I got AIM Services employees to go for training at Aramark, and I got Aramark’s senior management to come to Hiroshima to share what they knew with the Carp and their people. We were starting from zero, so I had to think about things from all sorts of different angles.

In August 2008, I relocated to Hiroshima. The stadium was to open in the following spring, so I was in the final leg of a marathon three-year preparation process. I threw myself into getting the sponsorship program up and running.

But then, of course, came the Global Financial Crisis. Starting in September, the economy cooled, and marketing budgets were the first thing to be cut. I promised potential sponsors that this stadium would be something completely new, but they were understandably skeptical. No matter how hard I worked, sponsors just wouldn’t sign up. It was a very tough time.

In the end, the first year of operation was extremely lean in sponsorship terms. Despite that, though, we still had the support of our team members and of the broad corporate network that our Chugoku Office and sales department had built up. We were also helped by the Carp’s strong ties with local businesses. I have nothing but gratitude for everyone who helped us.

It was a rocky start, but our numbers gradually improved. Today, there’s actually a waiting list for sponsorship. I can’t say how happy I am to have progressed so far.

Expanding the total sum of happiness 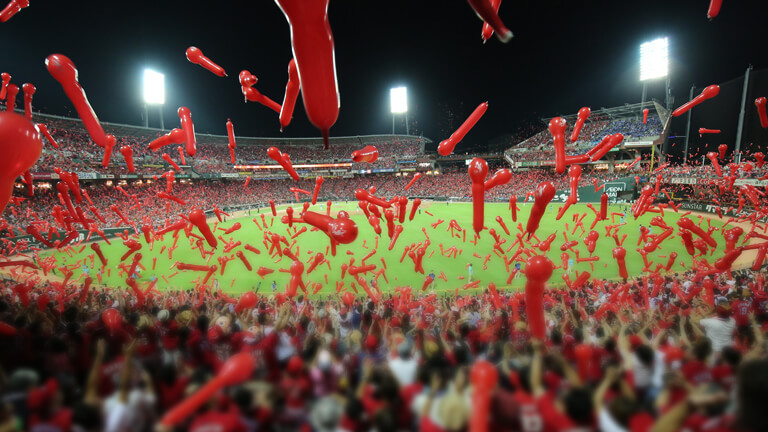 My strongest memory from the whole experience is the first game at the new stadium. It was April 10, 2009. All my work had finally come together. The game was sold out, and the spectators had a blast. Best of all, I wasn’t in the office but right there with them, drinking it all in with my own two eyes. There’s no greater joy than that.

In retrospect, when I joined the company as a student, I remember saying that I wanted to work on infrastructure—“things that last, things that are useful.” With the stadium project, I think I achieved something fairly close to that.

This may sound a bit pretentious, but I see achieving an increase in the sum total of human happiness as the basis of Mitsui’s profitability. Just buying low and selling high, with one side forced to take a loss, is a zero-sum game. Even a business that leaves both sides satisfied might still be environmentally damaging; people might still be working in unsustainable conditions. None of these businesses will last long. You have to design things so that your business delivers a net increase in total happiness, when all sides are tallied up. That net increase is where your profits come from.

And that’s the kind of business I want to be in.

From “connecting” to “creating”

These days, I’m working to accelerate the initiatives currently under way in the Corporate Planning & Strategy Department and reshape the way we work. The goal is to ensure that our employees have all the resources and support they need to do rapid prototyping of whatever business ideas spark their interest.

Trading companies have often been described as “connectors” who join one company or market to another. But in this time of dramatic change, our role is evolving from “connectors” to “creators.”

The culture at Mitsui expects employees to be individuals who embody entrepreneurship rather than just cogs in the organizational machine. That’s exactly the reason I was able to get approval for my plan to get us into the ballpark management business. If you can develop your own techniques for driving the business-creation process rapidly from a standing start, then you’ll be playing a really useful role at the company.

Knocking It Out of the Park: Japan’s Best Baseball Stadium