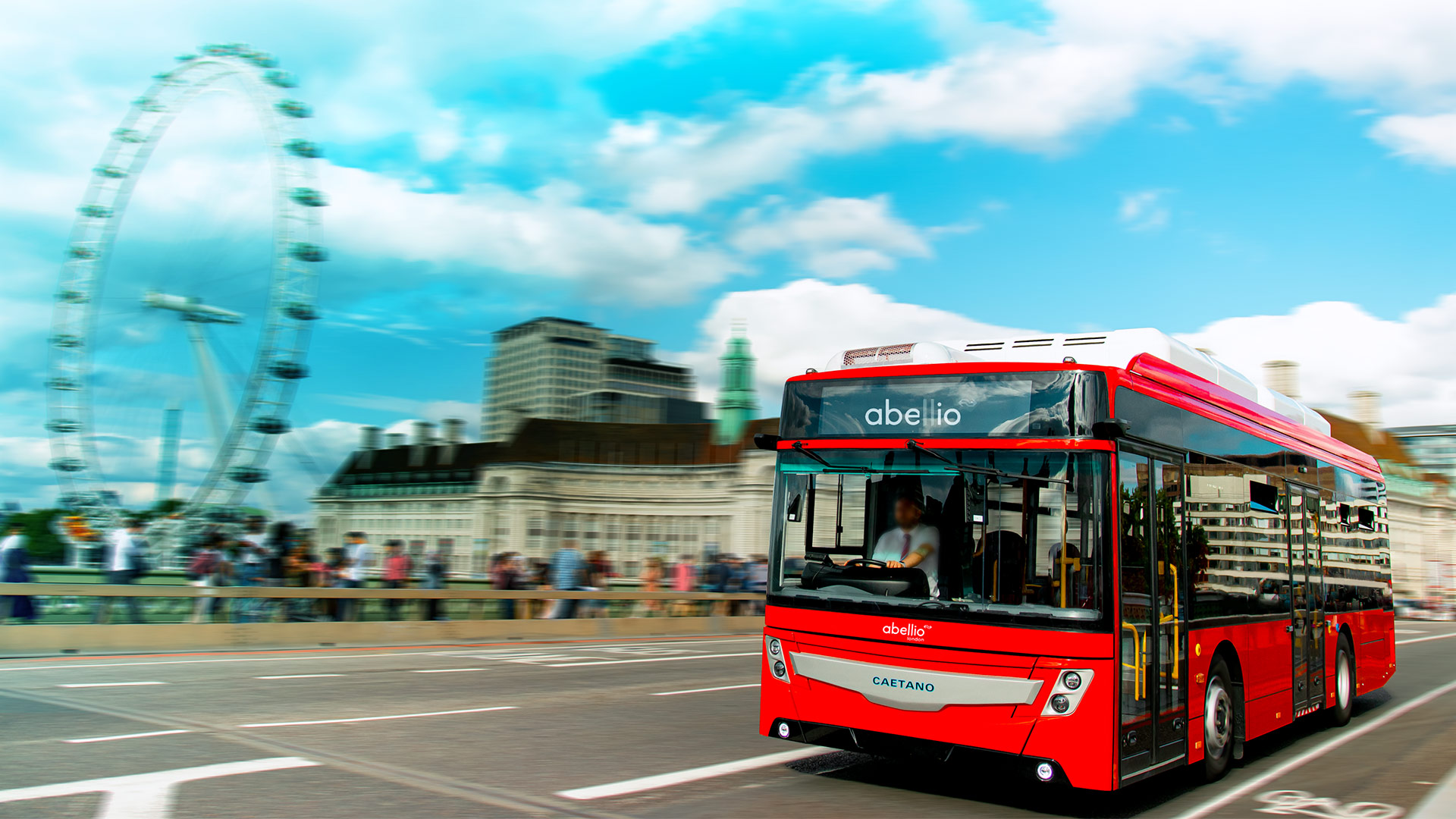 FULL CHARGE AHEAD:
Assembling an EV value chain for the smart-city era

The advent of electric vehicles (EVs) is shaking up the auto industry and poised to impact the whole fabric of urban living. Portuguese electric bus manufacturer CaetanoBus represents a key component in Mitsui’s overall mobility strategy.

For well over a century, the gasoline-powered internal combustion engine reigned supreme in the automobile industry. Over the last decade, however, electric vehicles have started to disrupt that well-established paradigm, with pioneers like Tesla garnering masses of media attention and lofty market capitalizations.

Driven by technological progress, the auto industry is undergoing a transformation on multiple fronts. The core technology is changing, with the EV’s combination of battery, motor and inverter replacing the traditional engine and transmission. The manufacturing process is also changing, with less focus on skill and know-how and more on the routine assembly of standardized parts. With automobiles increasingly seen as convenient tools for getting around rather than aspirational objects to own, value is migrating away from hardware toward services. At the same time, the function of automobiles is widening as they become an energy source as well as a means of transport.

What do all these changes mean in business terms? The switch to a new core technology threatens current incumbents and opens up the field to newcomers. The shift to an assembly-based model lowers the value of most components and the assembly process but actually elevates the value of the core technologies. (Think of the position occupied by Intel’s microprocessors in the PC business.) The perception of automobiles as fungible opens the way for a range of mobility services like ride-sharing. And finally, if aging car batteries can enjoy a second life as stationary storage batteries or parked cars can supply energy to the grid, the dividing line between the automobile, battery and power generation industries starts to blur.

Against all this upheaval, huge opportunities await innovative companies able to craft end-to-end mobility solutions covering both hardware and software/services.

Navigating the road ahead

That is the position Mitsui is looking to assume. The company has designed a three-step roadmap that encompasses the whole EV value chain from key hardware through to services. Simply explained, Step One involves establishing a foothold in the OEM business; Step Two involves using the technological know-how gleaned from that business to become a Tier 1 supplier of core components, engineering services and battery packs; Step Three involves developing services for the sharing economy ranging from premium ride-sharing and multimodal public transport solutions to the leasing and reuse of EV batteries.

A rapidly executed series of targeted investments mean that this roadmap is well on the way to reality. Mitsui has invested in two OEMs: Lucid, a US-based manufacturer of luxury EVs headed by the former chief engineer at Tesla (investment made in 2010), and CaetanoBus, a Portugal-based manufacturer of electric buses (2017). With Caetano having launched its first electronic buses in 2015 and Lucid scheduled to deliver its first model in 2020, the two companies’ technologies could form the basis for a push toward becoming a Tier 1 supplier to other OEMs. Meanwhile, Forsee Power, a French battery system manufacturer in which Mitsui took a stake in 2017, can provide battery packs. For Step Three—the development of services targeting the sharing and reuse economy—Mitsui invested in The Mobility House, a Germany-based EV charging solutions provider and stationary energy storage systems operator (2017), while Forsee Power (which we met a few lines earlier) also provides EV battery leasing and reuse services.

Taken together, these investments give Mitsui an end-to-end presence in the EV value chain with a focus on the most high-value-added parts. It is no coincidence that the majority of the invested companies are based in Europe, which leads the world both in the strictness of environmental regulation and in the innovativeness of its environmental technology. Longer-term, the idea is for Japan-based Mitsui to help bring these European solutions to markets throughout Asia, where the company’s network is particularly strong. 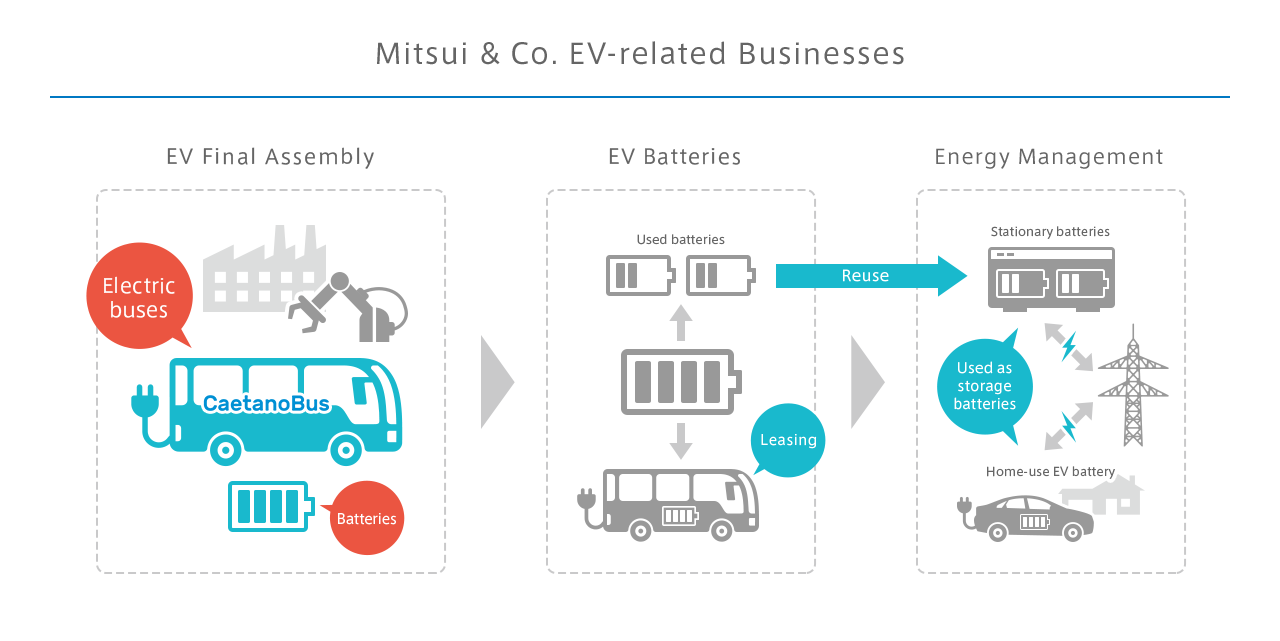 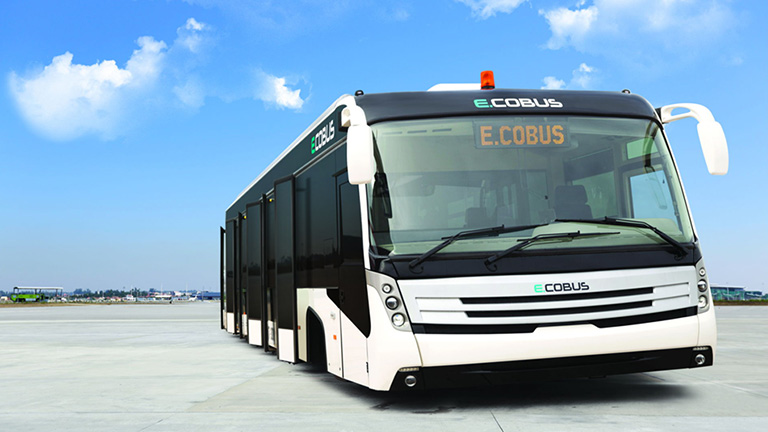 Mitsui’s December 2017 investment in Portuguese electric bus maker Caetano is significant for its size and its scope. Caetano manufactures city buses, mini buses and long-distance buses. It is also the global No. 1 for airport buses, which it produces in a joint venture with Daimler under the COBUS brand name. In fact, COBUS introduced the world’s first 100% electric airport bus, the E.COBUS, in 2015.

Multiple aspects of Caetano’s business model appealed to Mitsui. Firstly, while private vehicles are sometimes be used only on weekends, commercial vehicles like buses are used far more intensively, meaning that their economic and environmental merits are immediately clear. Secondly, buses play a central role in green public transport solutions for smart cities. Thirdly, and perhaps most importantly, Caetano’s management stance is flexible and forward-leaning.

Caetano originally specialized in developing bodies for buses while using engines purchased from major OEMs. The 2008 financial crisis, however, exposed the risks of this model. Post-crisis government austerity meant that domestic orders dried up, while the OEMs were reluctant to have Caetano selling buses into foreign markets where they sold finished buses themselves. Caetano’s response to this dilemma was bold: recognizing that developing its own internal combustion engines at this late stage did not make economic sense, it decided to start developing its own EV power train. Research and development got under way in 2010, with Caetano’s first 100% electric city buses coming to market in 2018.

Two of Caetano’s five directors currently come from Mitsui. Their focus is to plug the Portuguese company into Mitsui’s global network of partners to further reinforce its technological prowess and to capture new markets outside Portugal for its new technology. Results have been rapid and impressive. In July 2019, Caetano secured an order for 34 single-decker electric buses for two bus routes in London with delivery slated for 2020. In a classic piece of Mitsui synergy, the bid was made together with Abellio, a Europe-wide public transport operator with whom Mitsui already runs two UK train franchises, while the batteries for Caetano’s buses are being provided by Mitsui affiliate Forsee Power of France.

Winning the contract to supply a fleet of the globally recognized red London buses is a tremendous PR coup that could also help with Caetano’s next goal: to export the buses around the world. Japan, like the UK, is a left-hand traffic (LHT) country with the steering wheel on the right of the vehicle. Japanese buses are also around the same size as London buses. That makes Japan one potential export market—not to mention all the other Asian LHT countries such as Singapore, Indonesia, Malaysia and Thailand. Here again Mitsui’s network may come into play. In LHT India, for example, perhaps Mitsui partner Tech Mahindra could tweak the vehicles specifications to accord with local regulations and conditions.

One thing Mitsui and Caetano share is a long-standing relationship with Japanese auto giant Toyota. While Mitsui assembles and distributes Toyotas in various territories around the world, Salvator Caetano Group, the parent company of CaetanoBus, has been managing the first-ever Toyota assembly plant in Europe since 1968, as well as running Toyota distributorships for mini-buses and forklifts in Portugal. The two companies’ latest venture is the co-developing of zero-emission fuel cell buses based on Toyota technology. A prototype is scheduled for autumn 2019. The technology is particularly suited for certain bus designs (double-decker buses, articulated buses) where there is no space for a bulky battery pack. 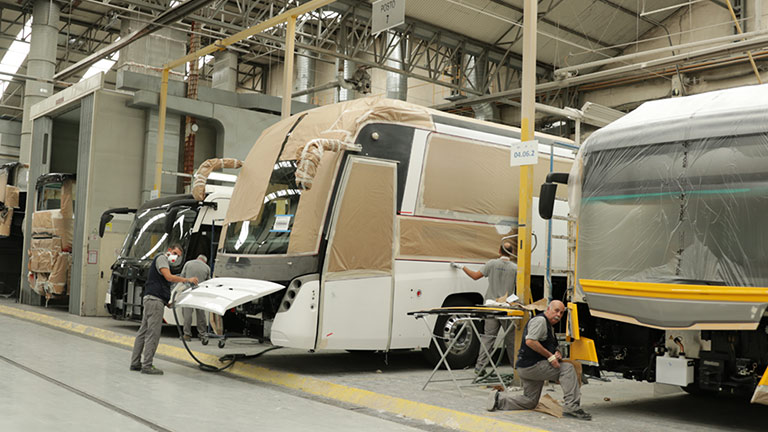 Caetano’s third organic growth pillar, alongside exports and fuel cell buses, is self-driving technology. Caetano’s COBUS buses run in airports. Their enclosed and relatively predictable environment offers an excellent sandbox for developing the technology, which could then be sold to third parties.

Finally, there are the opportunities for inorganic growth. This means leveraging the strengths of Mitsui’s whole network of EV-related companies to offer innovative smart solutions not just for transport (ridesharing, multimodal solutions) but for batteries and power generation (lease and sale of batteries, vehicle-to-grid power, home EV charging). It is still too early to know precisely what form the EV society will take, but clearly Mitsui, together with partners like Caetano, will play a crucial role in shaping it.