Mitsui & Co. places emphasis on interacting with and having dialogue with society. For this reason, we closely assess the effects of our diverse and global business activities on society and identify and acknowledge stakeholders of particular interest.

In particular, we are committed to the development of relationships based on mutual trust with a diverse range of stakeholders, including local communities, business associates & consumers, NPOs & NGOs, employees, shareholders & investors, and government bodies, through proactive information disclosures and continual communication with our stakeholders.

Through interactive communication with stakeholders, each of Mitsui's employees and officers is endeavoring to acquire a firm understanding of what society expects from and requires of Mitsui. Based on this understanding, we strive to respond to changes in market environments, and constantly evolve to create new value through our business activities by exercising our unique capabilities, and thereby contribute to the realization of a sustainable society.

To promote sustainability in our corporate management, we believe it is crucial to conduct dialogue with various stakeholders and respect their opinions regarding our business activities. To this end, we have continued to hold interactive stakeholder dialogue with external experts such as university professors and representatives of various NPOs and NGOs, as well as with the next generation of young leaders, including those representing Gen Z. 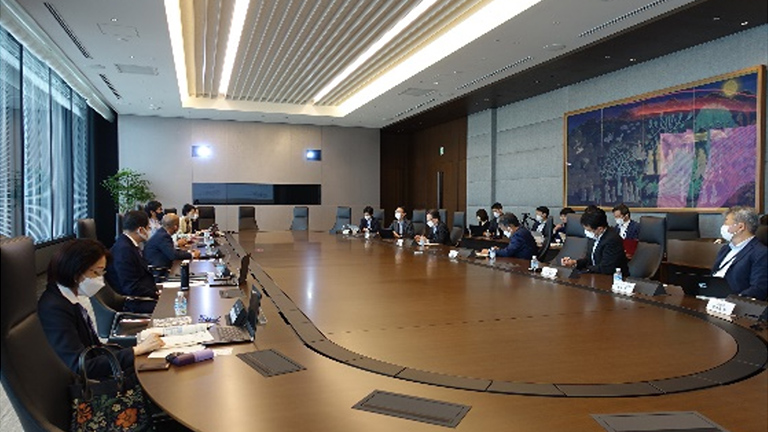 In September 2022, Yasushi Hibi, Vice President, Conservation International (CI), an international environmental NGO, and Managing Director, CI Japan, Makoto Haraguchi, Fellow at the MS&AD InterRisk Research & Consulting, Inc., and members of our Sustainability Committee, held a stakeholder dialogue session regarding the relationship natural capital including biodiversity and business. During the dialogue session, VP Hibi and Fellow Haraguchi explained what natural capital is, why it is attracting attention now, and what the Taskforce on Nature-related Financial Disclosures (TNFD) aims to achieve. They also explained initiatives of leading companies as well as their expectations of Mitsui, after which there was a lively exchange of opinions.

The participants discussed natural capital based on the differences from climate change, such as the existence of multiple indicators to measure natural capital, location-based characteristics including the general irreplaceability of nature that cannot be regained through protection or restoration in other places, and the difficulty of trading credits internationally for this reason, along with the importance of developing partnerships with local stakeholders on the ground. Although global targets and disclosure frameworks are still under discussion, we reaffirmed the need to keep a close eye on external trends, and for Mitsui to be prepared as well. As a global company with diverse businesses in all regions, we also reconfirmed the importance of identifying natural capital risks and impacts, including in the supply chain, as well as addressing new opportunities and businesses that will contribute positively.

*Titles were current at the time of the event

In February 2022, we facilitated a stakeholder dialogue event that was centered on the globally significant theme of biodiversity. It was attended by Mr. Yasushi Hibi, Managing Director of the Japanese arm of NGO Conservation International, Professor Mori of Yokohama National University, as well as Ms. Ichika Inaba, Ms. Arisa Kikkawa and Mr. Yutaro Aota of the Japan Youth Biodiversity Network.

The focus of the stakeholder dialogue was on goal setting and initiatives necessary from both long- and short-term perspectives, as well as the biodiversity conservation activities that Mitsui & Co. can conduct on its own forestland.

Mr. Hibi, Managing Director of Conservation International Japan said, "Biodiversity transition-related risks constitute an urgent issue. Rather than expecting a consumer-driven change, I expect companies to work together on initiatives to effect change in consumer values." "Consideration of biodiversity issues is intrinsically linked to consideration of human rights issues, and it is necessary that we address these issues from both environmental and social perspectives," he added.

Professor Mori of Yokohama National University said, "It would be costly to try and regenerate the biodiversity and environment that has already been destroyed. Priority should be placed on conservation, including preventative measures." "In terms of biodiversity, it's important to conduct diverse efforts from diverse perspectives, including with regard for people and cultures, rather than pursuing single targets such as those related to reducing GHG emissions in order to combat climate change," he added.

While praising Mitsui & Co.'s management of its own forestland, the members of the Japan Youth Biodiversity Network commented, "We hope these lands will be utilized not only for industrial purposes, but also as places where people can learn about biodiversity." "Most people lack awareness about biodiversity, and it's important to identify effective approaches for solving social issues that incorporate both natural conservation considerations and collaborative efforts alongside local residents in every aspect of industry."

The participants of this event all expressed the expectation that Mitsui & Co. would take the lead on this front, leveraging its unique business structure as a sogo shosha to pave the way for biodiversity initiatives, as there are few Japanese companies doing such work. Going forward, we plan to thoroughly consider the opinions expressed as part of these stakeholder dialogue events in order to incorporate them into our future initiatives.

*Titles were current at the time of the event