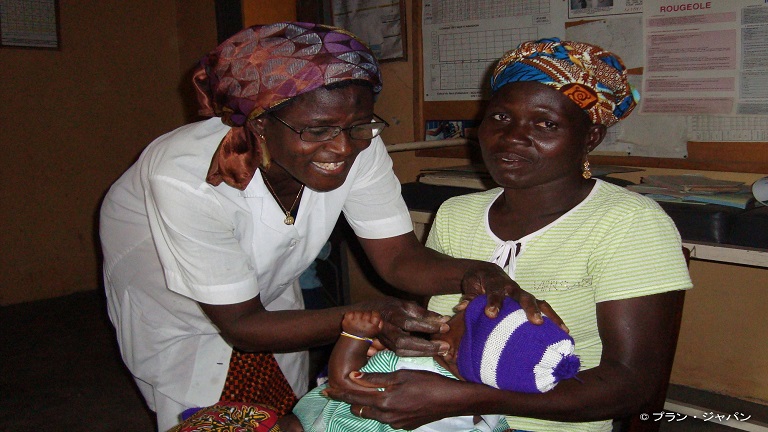 For MGVP 2015 (period: October 1, 2014 - December 31, 2015), the number of volunteers for MGVP's matching gift program was calculated as 6,375, bringing our total donation amount to 6,375,000 yen. We donated the full amount to the Nurses' Accommodation Construction Project in Ghana, undertaken by Public Interest Incorporated Foundation Plan Japan, and in September 2017, an opening ceremony for the facility took place.

In addition to a shortage of health facilities and equipment, in recent years the spread of HIV and AIDS has become a serious problem in Ghana, and the basic health indicators have generally remained low. Based on such conditions, Ghana's Ministry of Health has been working to expand basic health and medical services in rural village areas since 2002. Because of funding difficulties, however, the ministry has been unable to build the requisite health facilities sufficiently, and the lack of facilities and trained personnel has become a major hurdle. Many lives have been lost due to preventable and treatable illnesses such as malaria, respiratory system diseases, diarrhea, and undernourishment, especially in rural village areas that lack the means for emergency transport, and deaths of emergency patients, pregnant women, and nursing mothers occur all too frequently.

The nurses' accommodation was built in the Central Region of Ghana to enable nurses to reside in simple public health centers in the Gyabankrom area, where the maternal mortality rate is even higher than the already high national average. Awareness-raising programs were implemented for area residents on serious global health issues such as maternal and child health, treatment of malaria, measles, and other infectious disease that are particularly rampant in this region, and they have helped to enhance public health and medical services in Ghana. In addition, emergency response at night for infants and expectant mothers has helped reduce the maternal mortality rate, and morbidity and mortality rates of newborns and infants.

The implementation of this project will correspond to Goal 3 of the United Nations' SDGs (Sustainable Development Goals): "Ensure healthy lives and promote well-being for all at all ages".

Plan Japan, an international NGO that is officially recognized by and registered with the United Nations, aims to realize a world where all children can demonstrate their full potential. The organization is engaged in its projects in 51 countries in Asia, Africa, and Latin America from a standpoint that is neutral with respect to religion and politics.

As a member of international NGO Plan, Plan Japan implements community development projects to work with community members including children who live in harsh environments caused by poverty to improve their living situations in eight areas such as education, health, and water and sanitation.