The Callide Oxyfuel Project is a joint public-private initiative by Mitsui & Co., Ltd. ("Mitsui", Head Office: Chiyoda-ku, Tokyo, President and CEO: Masami Iijima), Japan and Australia. Participants include Electric Power Development Co., Ltd. ("J-Power", Head Office: Chuo-ku, Tokyo, President: Masayoshi Kitamura), and IHI Corporation ("IHI", Head Office: Koto-ku, Tokyo, President and CEO: Tamotsu Saito). A demonstration of the oxyfuel combustion system as part of an integrated oxyfuel combustion and CO2 capture process was successfully completed at the end of February 2015. Engineering and commercial knowledge gained through this trial will be used in feasibility studies leading to the establishment of systems to generate electricity in coal-fired power stations with near zero emissions of CO2 and other atmospheric pollutants, such as SOx, NOx and mercury.

This project is in progress at the Callide A Power Station, a coal-fired facility in Queensland, Australia. A demonstration of the world's first CO2 liquefaction and capture system based on oxyfuel combustion in a utility thermal power station began in mid-December 2012 and has been in progress for over two years. In addition to reaching the targets of 10,000 hours of oxyfuel combustion and 5,500 hours of CO2 liquefaction and capture, this demonstration has also verified the practicality and reliability of oxyfuel combustion technology.
Furthermore, from October to December 2014, carbon dioxide from the Project was transported by road to Victoria and injected underground at CO2CRC's Otway Project site in South Western Victoria. Building on the large body of work already done by CO2CRC, the injected carbon dioxide was used to evaluate the geochemical and physical behaviour of carbon dioxide within the resorvoir.

First proposed in Japan in 1973, oxyfuel combustion technology has been tested in small-scale projects in Japan, the United States, and the United Kingdom. This is the first project in the world to demonstrate an integrated process of oxy-combustion of coal in a utility boiler and CO2 capture. Now that the process based on oxyfuel combustion techonology as an important part of CCS has been demonstrated through this project, it will be introduced in existing or new thermal power stations. The technology is expected to contribute to the prevention of global warming.

This project is a public-private collaborative initiative by Japan and Australia. The Queensland participants are CS Energy (an electric power company owned by the Queensland Government), Australian Coal Association Low Emissions Technologies, Glencore and Schlumberger Carbon Services. The Japanese participants are J-Power, IHI, and Mitsui. These participants established a joint venture in March 2008 with financial grants from the Japanese government (Ministry of Economy, Trade and Industry), the Australian Commonwealth Government, and the Queensland Government. The Japan Coal Energy Center (JCOAL) is providing technical support.

Detailed information about the project can be found at www.callideoxyfuel.com.

The Callide A Power Station 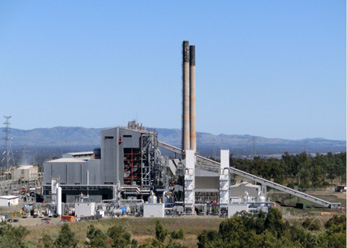