On 17 January 2017, the National Development and Reform Commission (NDRC) of China unveiled its 13th Five Year Plan on energy development, which represents the basic outline of China’s energy policy from 2016 to 2020. Five Year Plans for each category such as electricity in general, coal, natural gas, wind power, and solar power have also been sequentially released (Figure 1). This report analyzes China’s energy policy and related issues toward 2020.

Over the past few years, the domestic and international circumstances surrounding China’s energy policy have changed drastically. In terms of the domestic aspect, the Chinese economy has slowed and its economic structure has shifted from an industry-driven one to a service-driven one. This shift led to a substantial slowdown in the increase of primary energy consumption in China, with the year-on-year increase of such consumption remaining at 1.0 % in 2015, and 1.4% in 2016. Moreover, as air pollution caused by “PM 2.5”, or fine particulate matter has become a social problem, curbs on coal use as well as expansion of clean energy use are recognized as urgent tasks. In terms of the international aspect, crude oil prices have declined in the context of the US shale revolution, which benefits China as its dependency ratio of oil imports reaches about 60%. On the other hand, the “Paris Agreement,” international framework of measures for global warming took effect in November 2016. In this agreement, China set the goal of peaking its CO2 emissions around 2030 and, therefore, continued efforts are required to reduce CO2 emissions. The 13th Five Year Plan on energy policy is responding to these changes in domestic and international circumstances.

The pillar of the energy policy in 13th Five Year Plan is the improvement of the energy demand and supply structure, which China calls the “Dual Alternative.” Dual Alternative represents: 1) Switch from coal to natural gas; 2) Switch from fossil fuel energy to non-fossil fuel energy. The 13th Five Year Plan contains the guideline that the annual increase rate of primary energy consumption during the 5 years of the plan is to be restricted to within 3%, and that the coal rate of primary energy consumption in 2020 is to be restricted to within 58% (64% in 2015). On the other hand, the non-fossil fuel energy rate is set to be raised up to 15% (12% in 2015), and the natural gas rate up to 10% (5.9% in 2015). However, coal is still important to China as its self-sufficiency rate has reached over 90% and its cheap price. The 13th Five Year Plan has content which strikes a balance between economic growth and energy structural reform. This report introduces the points of policies regarding fossil fuels and renewable energy separately as follows.

Fossil Fuels: Curbs on Coal Use, and Expansion of Natural Gas

Coal is the most important energy in China, and it is also the main cause of air pollution. The problem of excess coal production capacity is also serious and curbs on coal use and reduction of coal production capacity are recognized as urgent tasks to be implemented. The 13th Five Year Plan is set to restrict the production volume of coal in 2020 to 3.9 billion tons (an annual average increase of 0.8% for 5 years) and the consumption volume to 4.1 billion tons (an annual average increase of 0.7% for 5 years). As for coal production capacity, there is to be a cut of 0.8 billion tons/year due to the abolishment of outdated facilities by 2020. The capacity of coal fired power generation is set to be curbed to within 1.1 billion kW in 2020. That is to say, an increase of 0.2 billion kW is expected from 0.9 billion kW in 2015. The generation percentage of coal fired power accounted for 49% of the total amount of coal consumption in 2015, and it is set to be raised to 55% in 2020. In China, the major contributing cause of air pollution is the coal that is consumed dispersively and inefficiently at coal-fired factory boilers and other facilities. While curbing such coal use, coal-fired power generation for the purpose of intensive and efficient usage is to be expanded.

Natural gas use is to be expanded as clean energy. The total volume of its domestic production will be expanded to 207 billion m3 in 2020 (135 billion m3 in 2015), of which shale gas will be expanded to 30 billion m3 (4.6 billion m3 in 2015), and the total extension of natural gas pipelines will be to 104 thousand km (64 thousand km in 2015) by 2020. Import capacity of natural gas from areas such as Central Asia is to be increased. In terms of its usage, a policy promoting a shift from coal to natural gas as the fuel for factory boilers and household heating is to be pursued. Also, natural gas power generation will be promoted mainly by way of peak-load power generation and distributed generation. The capacity of facilities for gas fired power generation is to be expanded from 0.066 billion kW in 2015 to 0.11 billion kW in 2020. As for oil, the plan shows that domestic production of crude oil is 0.2 billion tons or more in 2020, apparent consumption is 0.59 billion tons (annual average of increase is 1.5% for the 5-year period), and net imports are 0.39 billion tons (annual average increase is 3.2% for the 5-year period).

As for targets in China’s Five Year Plan, there are two types: a “binding target” which is the mandatory target to be achieved, and an “anticipationary” which provides insight into the likelihood of achievement, and the latter is not always achieved. For the 12th Five Year Plan, targets for the natural gas ratio of primary energy consumption, production volume of shale gas, and facility capacity of new clear power generation have not been achieved (Table 1). In the 13th Five Year Plan on energy development, the production and consumption of natural gas in the short term is slowing down, therefore, achieving the target of production and consumption by 2020 is expected to be difficult1. Considering recent decline in oil production and surge of net oil import, it is also likely that oil production will be below the target and net oil imports will surpass the target. 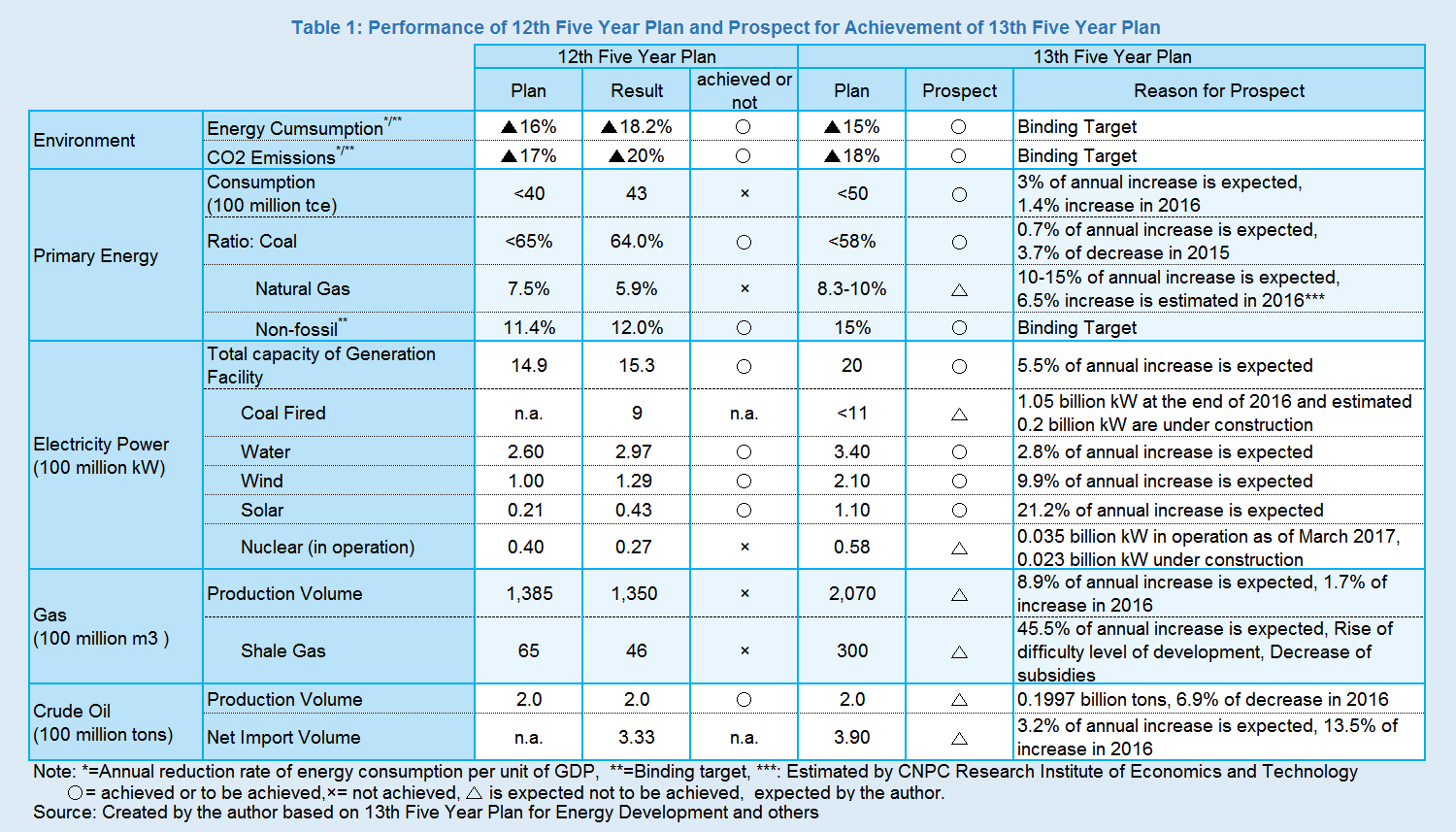 Renewable Energy: Correction of “Emphasis on Its Facility Construction, Disregard for Its Use”

China’s development of non-fossil energy (renewable energy and nuclear power) is rapidly being promoted. The non-fossil energy ratio of total primary energy consumption has risen from 9.4% in 2010 to 12% in 2015. The capacity of power generation facility in 2015 is 0.297 billion kW of water power, 0.129 billion kW of wind power, and 0.043 billion kW of solar power (including solar heat). Any one of these numbers is the world’s largest for its category. In the 13th Five Year Plan on energy development, non-fossil energy ratio is to be raised to 15% in 2020. Annual average increase in facility capacity is 21.2% in solar power, and 9.9% in wind power where high growth is expected, though it is only 2.8% in water power2.

The Chinese government also recognized that the existing renewable energy policy was “placing an emphasis on facility construction, but disregarding usage,” and therefore the 13th Five Year Plan is aiming to redress the problem. First, they will promote balanced introduction of facilities among regions. 57% of the increased wind power generation volume for 5 years (0.081 billion kW) will be allocated to the east and the south, and 43% to the west. Solar power generation will also shift its focal point from large scale generation in the west to distributed generation in the eastern and central China. In addition, the Chinese government will expand the volume of pumped storage power generation from 0.023 billion kW in 2015 to 0.44 billion kW in 2020, as well as promote the introduction of natural gas-fueled generation in order to strengthen peak-load ability. China has set the target to raise the rate of non-fossil fuel of primary energy consumption up to 20% by 2030. The goal of the 13th Five Year Plan (15% by 2020) will be an important milestone. To this end, raising the usage rate of renewable energy is one of the important issues in the 13th Five Year Plan, as well as continuing to expand the introduction of renewable energy.

This report analyzes China’s energy policy and issues toward 2020 from the perspective of structural reform on energy, which has mainly focuses on curbs on coal use as well as expansion of natural gas and renewable energy. Items which are closely related are deregulation and system reform such as energy price reform, electric power system reform, and third parties’ access to oil pipelines and liquefied natural gas (LNG) terminals. The reform of state-owned companies in the energy sector will be also required. Chinese President Xi Jinping is likely to further enhance its power base at the Communist Party Congress in autumn 2017. Many will be looking to see whether or not his administration can carry out reform in a speedy manner.