The Strengthened US Sanctions Act Against Russia

On August 2, 2017, the Countering America’s Adversaries Through Sanctions Act, targeting Russia, North Korea, and Iran, (hereinafter, for the purposes of this article, referred to as the “New Russia Sanctions Act”) came into force in the United States. Before this act, the US sanctions imposed on Russia could be relaxed or reversed at the discretion of the president, but with the enactment of this law, the approval of Congress will be required to ease or lift the sanctions. The targets of the sanctions and the sanctions measures themselves have also been expanded and strengthened.

What is noteworthy about the new act is the fact that not only does it strengthen the existing sectoral sanctions targeting the Russian financial, energy, and defense sectors, but it can also be extended to Russia’s state-owned rail, metals, and mining enterprises, should the Treasury Secretary consider it necessary. As is the case in the financial, energy, and defense industries, the Russian government owns a large share of the country’s rail, metals, and mining industries through state-owned enterprises, and targeting these new sectors is truly representative of the expansion and strengthening of the sanctions.

As for the energy sector, the existing sanctions have been tightened and a new measure introduced in the act makes it possible for the sanctions to be applied ex-territorially so that it is not just US citizens and US companies that are obliged to comply with the sanctions, but also foreign individuals and companies. The sectoral sanctions imposing restrictions on the procurement of funding by Russian energy companies have also been tightened, reducing the maturity period for transactions involving debt from 90 days to 60 days. Sectoral sanctions prohibiting the provision of technology and services relating to the development of deep-sea and Arctic offshore crude oil and shale oil, which had previously been limited to the Russian territory, now also target projects outside of Russia in which a sanctioned Russian company holds a share of 33% or more. In addition, sanctions on investments in “special Russian crude oil projects” (Item 7 in the Table), which had previously been discretionary, have been made mandatory, and now also apply ex-territorially to foreign individuals and companies. 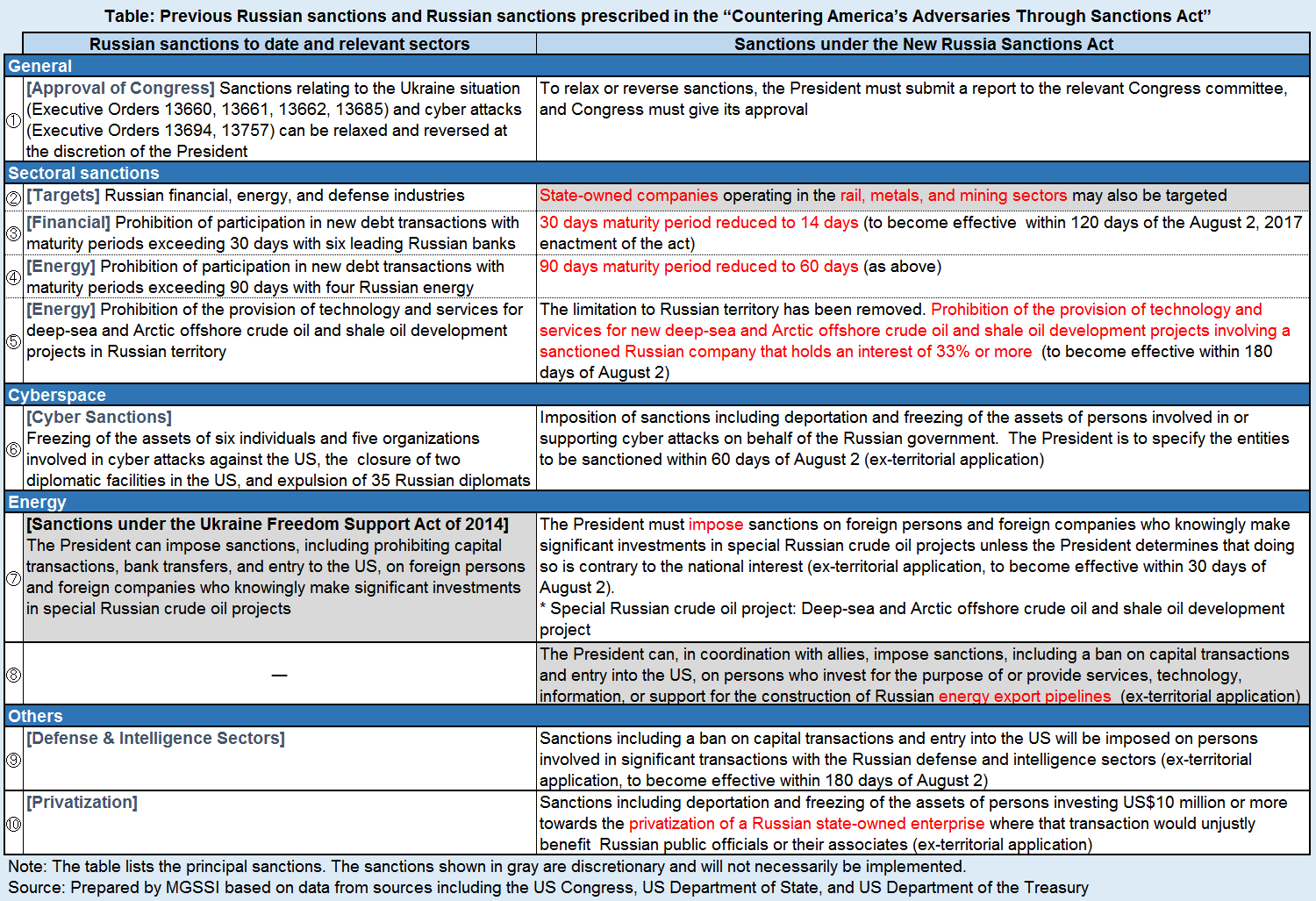 The enactment of the New Russia Sanctions Act has been attributed to the move made by the US Congress to take the lead over policy towards Russia, including sanctions, because it harbors suspicions that President Trump, who repeatedly made remarks that were favorable to Russian President Putin during the US presidential election, might lift the sanctions against Russia without good reason. Daniel Fried, a former US Coordinator for Sanctions Policy, has also said that Congress sought to strengthen and codify sanctions against Russia into law due to suspicions over President Trump’s praise of Russia. A backlash against Russia’s intervention in the US presidential election could also be seen as another factor behind the strengthening of sanctions.

What most concerns companies and investors about the New Russia Sanctions Act is probably the uncertainty over how the Trump administration will actually apply the sanctions. Take for example the sanctions on investment in construction of Russian energy export pipelines. The imposition of these sanctions is discretionary, depending on whether the President considers it to be necessary, and it has been announced that measures will be imposed “in coordination with allies.” This suggests that the hurdles to actual ex-territorial application of the sanctions are likely to be high. On the other hand, however, there is no description of the mechanism for this “coordination with allies” within the provisions of the act. Concerns have also been raised that sanctions could be applied ex-territorially in cases where a foreign company joins a project for which a US company had withheld investment so as to avoid being subject to the sanctions. It is little wonder that in an increasing number of cases companies and investors are turned off by the lack of predictability.

The prolongation of sanctions is also a concern for investors. Once US sanctions have been passed into law, they tend to remain in place for a long time, as has been the case with sanctions against Iran and Cuba. Investors also remember that the Jackson-Vanic Amendment introduced by the US in 1974, which targeted the Soviet Union for not allowing its citizens to emigrate overseas freely, was not repealed until 2012, long after the Soviet Union collapsed and its Jewish citizens had been free to emigrate. Just as Russian Prime Minister Dmitry Medvedev has also expressed his wariness over the prolongation of the sanctions, stating “The sanctions regime has been codified and will remain in effect for decades unless a miracle happens”, the New Russia Sanctions Act is expected to have a negative effect on US-Russian relations for years to come.

In light of the above, even if the strengthening of sanctions does not lead to a sudden deterioration in Russia's economy, there are concerns that, in the short term, it could lead to an increase in capital flight from Russia and postponement of investment decisions due to a deterioration in investor sentiment. In the medium to long term, it is expected that the effects of sanctions will begin to appear slowly but steadily in the form of a decline in crude oil production and a decrease in direct investment.

Impact of the New Russia Sanctions Act on the Diplomatic Front

It is inevitable that diplomatic relations will also be affected by stronger sanctions. In the past, Europe has coordinated with the US on sanctions against Russia, but this time, since the strengthening of sanctions was mainly prompted by the domestic sentiment and led by Congress, coordination with Europe seems to have been insufficient.

One particular source of discord between the US and Europe was the sanctions targeting investments in pipelines for exporting Russian crude oil and natural gas (Item 8 in the Table). Until now, the US and Europe have been in lockstep over not applying sanctions on Russia’s natural gas sector because of Europe’s high level of dependency on Russian natural gas. However, under the new sanctions, investments in the pipelines have become a potential target. Also, the Europeans sensed that the underlying aim of the new measures was to help the US companies that export natural gas to Europe. It was another factor that has hardened European attitudes. Plans are currently underway in Europe to construct the new “Nord Stream II” natural gas pipeline, and Germany, Austria, and France were strongly opposed to the possibility that the pipeline could be subject to sanctions. Eventually, a definite conflict appears to have been avoided by amending the law with the addition of wording stating that measures will be imposed “in coordination with allies”, but if the US and Europe fall out of step over this, it could provide an opportunity for Russia to drive a further wedge between them.

That said, Russia has limited scope to take countermeasures against the US. In the first place, Russia has far less trade and investment links with the US than it does with Europe, and it does not have the kind of international financial system possessed by the US. To date, Russian countermeasures to sanctions have consisted only of an embargo against European and US agricultural products. In retaliation for the strengthened sanctions, Russia merely announced that 1) US diplomatic staff in Russia will be reduced to 455, equal to the number of Russian diplomats in the US, and that 2) the US embassy in Russia will be prohibited from using warehouse facilities and “dacha” (country villas). No mention has been made of economic measures. These countermeasures, too, were initially devised by Russia at the end of 2016 when former President Barack Obama expelled 35 Russian diplomats in retaliation for a Russian cyber attack (Item 6 in the Table), and their implementation was postponed back then. The reason for the postponement was the high expectations that Russia had of (then) President-elect Trump, who had declared his intention to improve relations with Russia through “deals”. However, the fact that Russia has revived the countermeasures that it once postponed indicates that Russian expectations of an improvement in relations are waning fast.

Among the measures stipulated in the New Russia Sanctions Act, the very first ones to be introduced are the sanctions targeting foreign individuals and foreign companies in connection with investments in special Russian crude oil projects. With sanctions expected to remain in place for a long time, the lists of designated sectors and sanctioned persons announced by the Treasury and other departments in future will not only serve to determine the actual application of sanctions and the nature of coordination with Europe, but will also attract a great deal of attention as a means of forecasting the prospects for US-Russia relations.

Judging from his signing statement, President Trump believes that the New Russia Sanctions Act could have “unintended consequences… for American businesses, [its] friends, or [its] allies”, and it is indicative that he is reluctant to strictly enforce sanctions against Russia. However, there is an overwhelming cross-party consensus in the US Congress to take a tough stance against Russia. If Congress were to determine that the President and the executive branch were adopting a soft attitude towards enforcement of the act, it could well move to strengthen the sanctions against Russia further by amending the act. Moreover, depending on the outcome of the investigations into the Russiagate allegations, it is possible that anti-Russian sentiment in the US may increase and momentum towards stronger sanctions may grow. Accordingly, it will also be necessary to keep an eye on the domestic political situation in the US. Were the US to strengthen the sanctions again, it could lead to a tit-for-tat exchange of retaliatory measures, and US-Russian relations would remain at a dangerously low level with a risk that conflict would be further intensified.