RUT operates at the Port of Riga, Latvia's largest seaport ideally situated on the Baltic Sea where it has long remained a key crossroad for trade between the East and West. Today, the port functions as a gateway to Russia, Kazakhstan and other burgeoning states in the region thanks in part to Riga's proximity to railway lines having the same track width as those in CIS countries and extending to CIS countries that make it the starting point for rail shipping bound for central Asia via Russia, which borders on Latvia.

RUT's multipurpose terminal operations at the Port of Riga include loading and unloading of bulk freight and cargo containers, cold storage, and rail transport. Meanwhile, the port itself accounts for some 70% of Latvian exports of wooden pellets, wood chips, lumber, furniture and other timber product exports, the leading industry in a nation where roughly half of its land is covered by forests. RUT has been steadily expanding its operations with an increase in container shipping of food products, clothing and other such cargoes, which RUT launched in 2009, in addition to its handling of timber products and other bulk freight shipments.
RUT also owns one of EU-certified portside cold storage facilities operated in only two locations within Eastern Baltic region, through which the company handles frozen-cargo shipments of goods such as US chicken and Nordic fish to Kazakhstan and other CIS countries.

Going forward, Portek will provide RUT with its expertise in container terminal operations, an area where RUT is inexperienced, to improve the company's cargo-handling efficiency and other such operational benchmarks and help its container throughput double.

Since its September 2011 acquisition of an equity stake in Portek, Mitsui has been drawing on the company's competence at modernizing and streamlining port operations in pursuing new business opportunities involving port terminal facilities worldwide, with a focus on emerging nations. 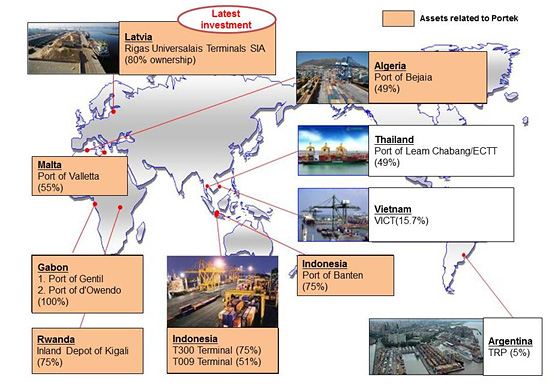 Against that backdrop, Portek's acquisition of an ownership interest in RUT further enables Mitsui to embark on the port operation business in Europe, thereby putting Mitsui in a position to capitalize on economic growth in the burgeoning CIS region encompassing Central Asian nations and Russia. Meanwhile, this arrangement also brings with it potential for Portek to further expand its logistics infrastructure business, given that the company is now poised to accumulate know-how through significant bulk cargo, while also enabling Portek to leverage its efforts that entail forging new bulk terminal opportunities and overseeing such operations in Asia, Oceania, Africa and other parts of the globe.